Hi There ! It’s been a while since I posted – I have just been busy with life  (read  “lazy” or occupied with random things). But, am back now.

This is not really a blog post per se. I just felt like putting up a refresher to people who are familiar with C programming. It’s in a concise question and answer format ; won’t take too long ! Go ahead … 🙂

01. Can two different type of variables be declared with same name ?

The answer to this is : Yes – if they are not in same scope (local / global scope) and variable name is not used for a “#define” constant.

If both are in local or both are declared in global space – then there will be a clash in the symbol name space.

02. What happens to uninitialized const variable ?

It gets initialized to zero. Example : const int a; declaration will set “a” to zero and cannot be modified. Keyword “const” makes the variable a “read-only”.

Even when we use keyword “static” the variables are by default initialized to zero.

03. Can we have a structure with bit fields ? How to achieve this ?

For example :  If you want a structure that holds two variables whose values can range from 0 to 15 then , all we would need is two fields with 4 bits each. This can be achieved using a declaration as below :

04. What is structure packing?

We would want to make sure we are packing the structure variables “efficiently” – specially on embedded memory limited systems.

Yes, there can be problems when you cast a larger data type to smaller one -i.e., loss of information. Consider the example below :

Suppose input variable “a” was set to 0xFF  (max value for an 8-bit integer), adding a value of 100 requires more than 8 bits to hold the result of addition – resulting in an overflow when the value returned is stored in an 8 bit integer – “temp” in this example.

And, trust me when I say these can result in hard bugs to catch when they happen in production code. So, please take care of scenarios involving implicit conversions such as this ! Make sure you have fixed all the warnings your compiler spits out or at least take a look at the warning messages.

Unions allow data members that are mutually exclusive to share memory. This is important specially in the embedded system cases where memory is a scarce resource.

For example : If you implementing protocol handler with different kinds of messages that can be exchanged, we could handle the different message types and their allocations as below on an embedded system :

Well! One reason I can think of is – it’s not only important that we write efficient code but also readable code. Enum(s) provide us a way to add readability to our code.

Suppose you are writing some api and want to return custom status codes -1 , 1 and 2 – to mean different return status, to the caller. We can write human readable code as below, instead of using the status codes as numbers (-1, 1 ,2) directly.

08. What is the difference between “#define” of a constant and declaring it “const int” ?

As a novice programmer, when I started with C , I wondered why were there two options to do the same thing – which one is to be used ?

#define is essentially a preprocessor directive. The C preprocessor shall replace all occurrences of the given variable in the code with the value before compiler compiles the code.

Whereas const is acted upon by compiler. It only indicates that the variable is “read only” , all rules of a variable apply to it as well. But, if a compiler doesn’t optimize and replace these occurrences, then there will be an overhead.

When you don’t really care about the types  -for example : a variable that holds a fixed constant could be #defined !   Also, if you are designing in a large team : #defines may be a good option as they throw a compile error when we redefine a local variable with same name, as in the example below.

int* ptr; // pointer to an integer

10. Compiler and volatile qualifier in C

Compilers with optimization enabled try to make code smaller and faster based on some rules.  Volatile keyword is used to indicate to compiler to “not optimize”.

There are cases where a variable may be updated in ways unknown to the compiler – such as :

basically, where the updates made to the variable are not in the local scope of the code block. When this keyword is not used, the variables are cached to a CPU register or optimized out by the compiler.

“Volatile” ensures that the variable reads and writes are not optimized away.Consider the example for volatile usage below :

If you have a global variable (named value_to_write) that is shared between the main program that writes value from this variable to a port and an ISR that writes to this variable. We can have three cases that will have different behavior based on compiler optimization state and volatile qualifier is used or not. 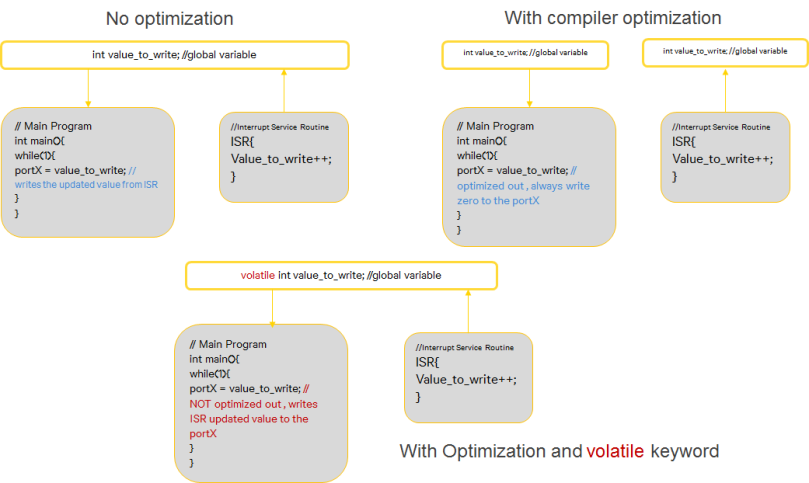 But, there are some things to consider before using Volatile qualifier and they are listed here. Do check this link.

Yes, each of these topics deserve a separate blog. But, that’s all for now in this blog. Keep decoding !~